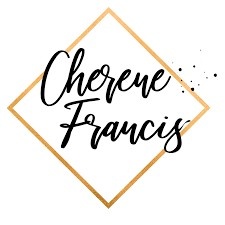 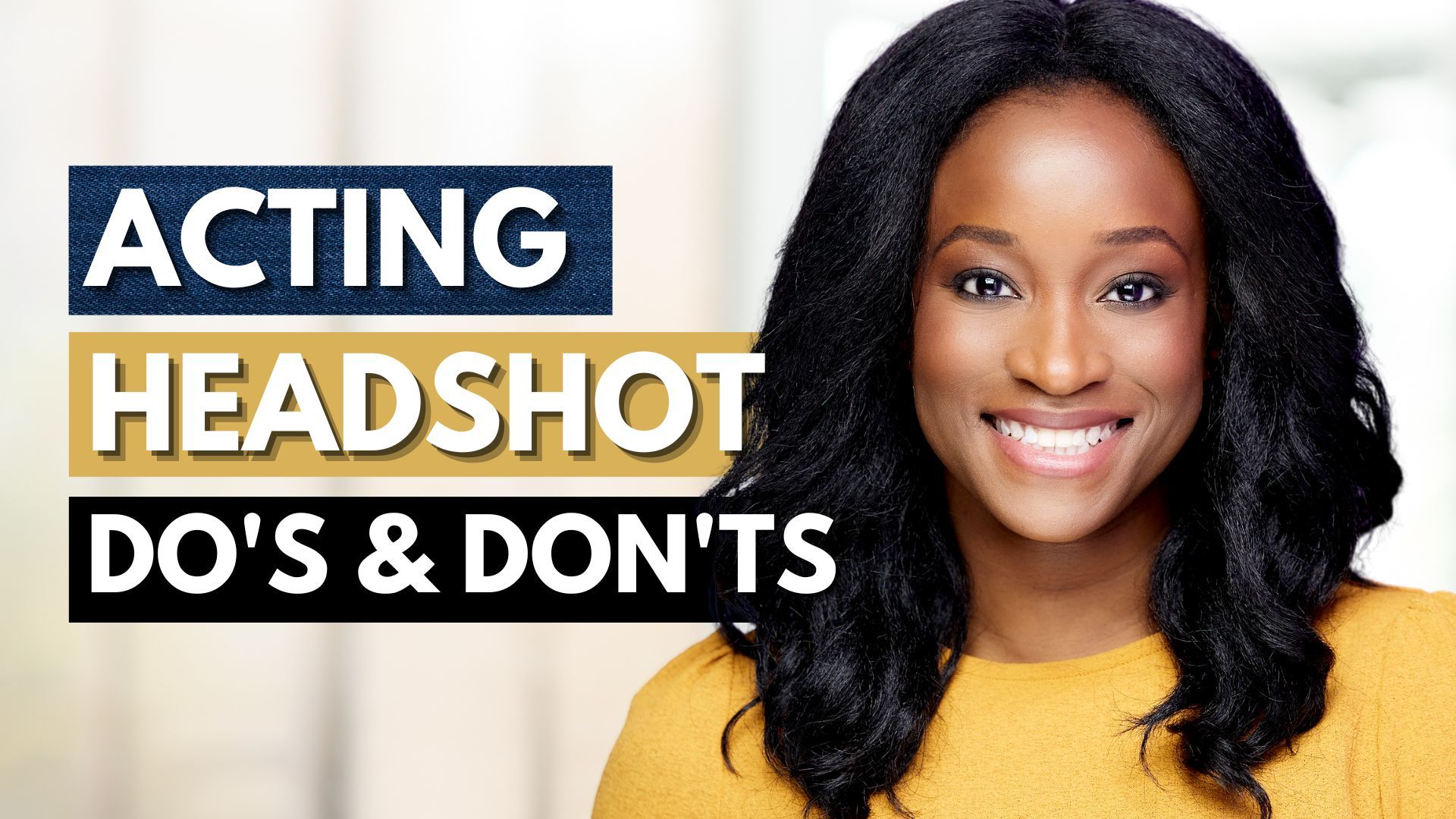 Headshots for actors and creative professionals are not the same as regular photoshoots. I share my entire process of getting acting headshots in this video and blog.

Read the Full Video Transcription Below

I will share my process before, during, and after getting my new acting headshots.

Before I go into the process, let's talk about my previous headshots.

I started acting in my 30s. When I jumped back in, I did my headshots two times before I started to see success. The first time around, I went to a very reputable photographer. The style of the photos wasn't the best for my look and skin tone, being nice and chocolatey brown.

When I first got those headshots and started using them, there was actually a casting director that I saw in person for an audition. When I walked into the room and she pulled out my headshot, she said, "This is hideous!"

And I was like, "Ooh! I need to get new headshots".

The reason was I looked pretty pleasant and nice, and the photos didn't do me justice. That was a compliment.

But at the same time, I was sad because I had invested $700 (Canadian). My agent was like, for your look and type, very polished as an individual, and the photos were really gritty and didn't go that well with me.

Unfortunately, I had to get rid of those photos. I got new headshots. This wonderful woman is named Lindsay McDonald. She's in Mississauga, the greater Toronto area in Ontario, Canada.

Hopefully, you find someone that works with you. She had taken photos of many people on our roster and people with similar looks to me.

And yeah, I got some headshots that worked great. I got a great response.

The only thing that I regretted from that photo shoot was that in all of the shots, I was smiling like ⎯

As actors, we want to show ourselves, but we also want to show ourselves in different emotions and facial expressions, and characters. I never really brought that to that photo shoot. As I was journeying in my acting career, I wanted to make sure that next time, I am really honing in on the characters I want to play and the brand I want to present. And so I did a lot of planning.

I'm going to share with you what I did for that process.

The first thing I did was a whole bunch of surveys. I went into different acting communities on Facebook. I had a survey where people would describe their first impression of me?

What type of movies do they see me in?

What type of characteristics do I have?

I did them in a Google Form, and people fill them out. I had at least about 40 responses in total. But the more, the better; you could start seeing the variety.

Once I had all these responses, I organized them into a spreadsheet.

Also, I had to balance that research with what I wanted to play as an actor. I had to look at my dream roles versus what people see in me.

So then I went over and organized it. Balance your values, what you want, what you've booked, and what people are seeing in you – a distressed, psycho-thriller action, sci-fi stunt girl.

I pulled these photos from the web, just random headshots that I liked in the look that I wanted to go for; reporter, journalist, detective, lawyer type, comedy, commercial, romantic comedy, Hallmark movies, film a lot in my area. So I want to land one and catch all women aged 35 plus.

Obviously, this time around, I have a different look. The reason is that when I looked at many of my bookings, this look did hit well.

And I also have a reel that shows my hair out curly. So I decided to do my headshots with my hair like this.

Now that I know the types of shots I want, I also made sure to pair them with clothing.

So I did go shopping.

Listen, you don't have to buy and keep everything you buy.

That way, I could keep the clothing and put it on just for the shot, and then once I'm done, put it back in the bag and return it.

Stylists do this for actual photo shoots. I would return it if you really need the items or can work with them in your auditions.

PsychoThriller - Action: This is the top I got for the distressed psychothriller action. And this is how my face is going to look. It's going to look better because I'll have makeup and stuff, but I wanted it to look serious. 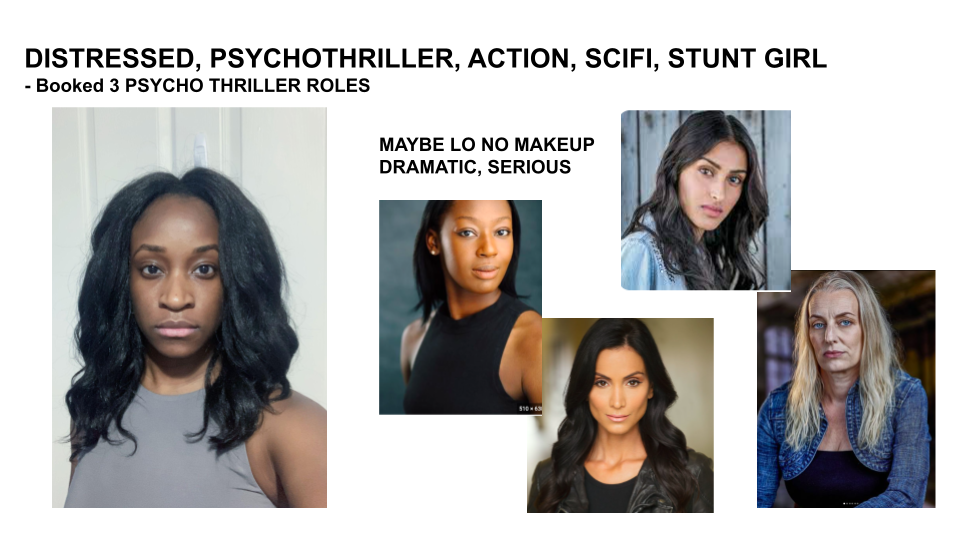 Reporter - Lawyer - Detective: And then the reporter role again; I wanted it to look serious this time. 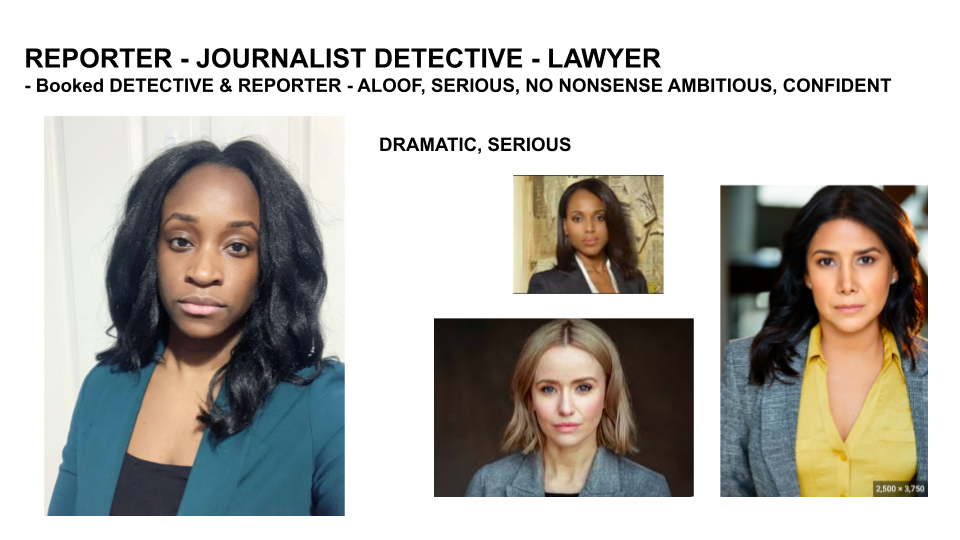 Comedy and Commercial: I got a couple of tops. I wasn't sure which one. I was thinking of bright blue because we had some bright blues here. But I tend to cast a lot in my denim shirt; You can't really see the nice blue color here because this is not a real headshot. 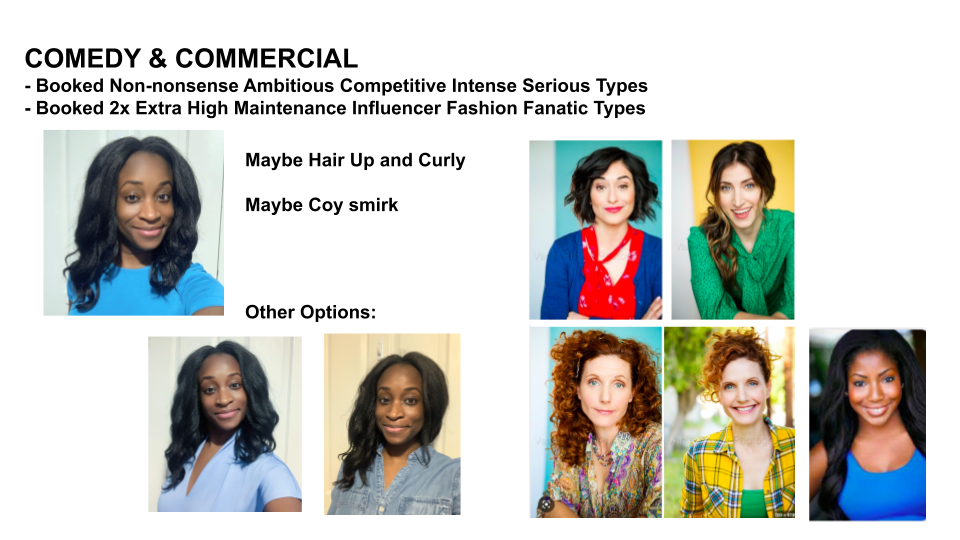 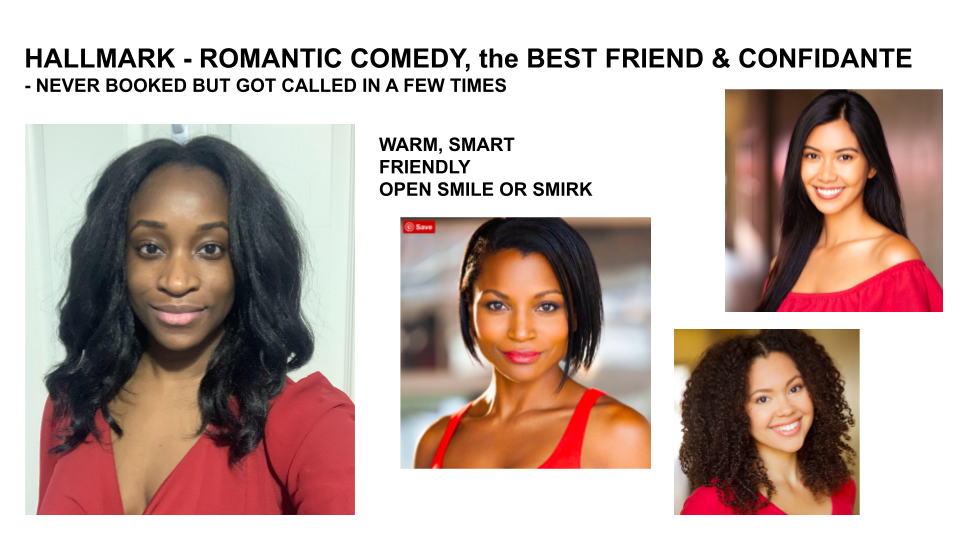 Catch All Women Age 35+ for All Media: Talk show host etc. I will bring all these tops, but I will also bring backup tops. Just in case, my photographer is like, "No, that's not the best color." 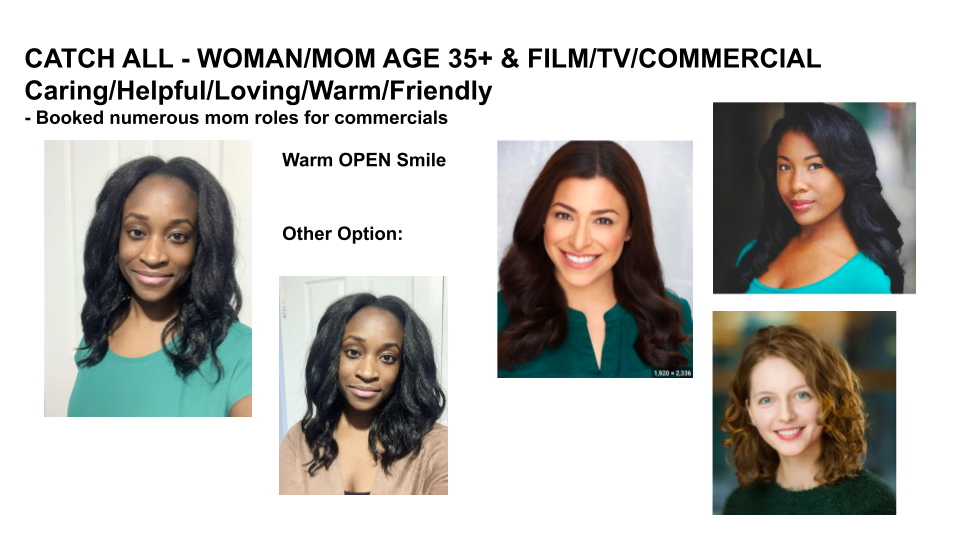 So I know this might look a little bit tedious, but to be honest, I'm so glad I did this.

I do Branding and Marketing for companies, and I always, especially if I'm bringing someone in for a photo shoot, like a professional, to do videos; will always make a storyboard for what we are putting together.

If you're on set, the wardrobe will get picture inspirations and align it with the storyboard, and they will also print it off and bring it to set.

This is not new stuff. So I highly recommend it.

It'll also help you be super organized when you're going into your photo shoot.

I did my shopping, got my photos together, did my collages, and then the night before, I made sure that I organized everything.

I put everything on hangers. I made sure it was well-steamed or ironed.

I taped the collage onto the hangars with the items like it was so organized.

The next day, I grabbed my bag, got there, and did my makeup with @LTBeautyy, who at the time was working with Lindsay Macdonald on doing makeup for the actor.

I am very happy with what she did.

The only thing I would probably just say as advice to you is to make sure your makeup artist is doing the makeup so that you can repeat what she did.

I usually come very clean face like this for all of my shots. Sometimes I'll put a little black eye shadow, but I can replicate what she did if I needed to.

So as you can see, I organized my rack, and my rack was ready to go. Lindsay even gave me a shout-out on social media because she was so impressed by my organizational skills.

I knew, for what shot, what my poses would be.

I knew what type of movies it would be in, what I'd be called in for.

I had the emotion and the storyline going in my head.

Literally, within about an hour, Lindsay had my whole 300 and something photos ready for me to view.

My agent picked the best photos for each category and then sent them to me.

I just had to look through the ones my agent sent me.

I looked through them, thinking of what will this land me, thinking about my past casting and what was I booking before.

I brought in my friend, actor colleague, and husband to help me choose. There were some conflicts where some were voting for one photo.

When it comes down to it, you must know what you want and how you want to show up.

Now it's just presenting the headshots to the world! 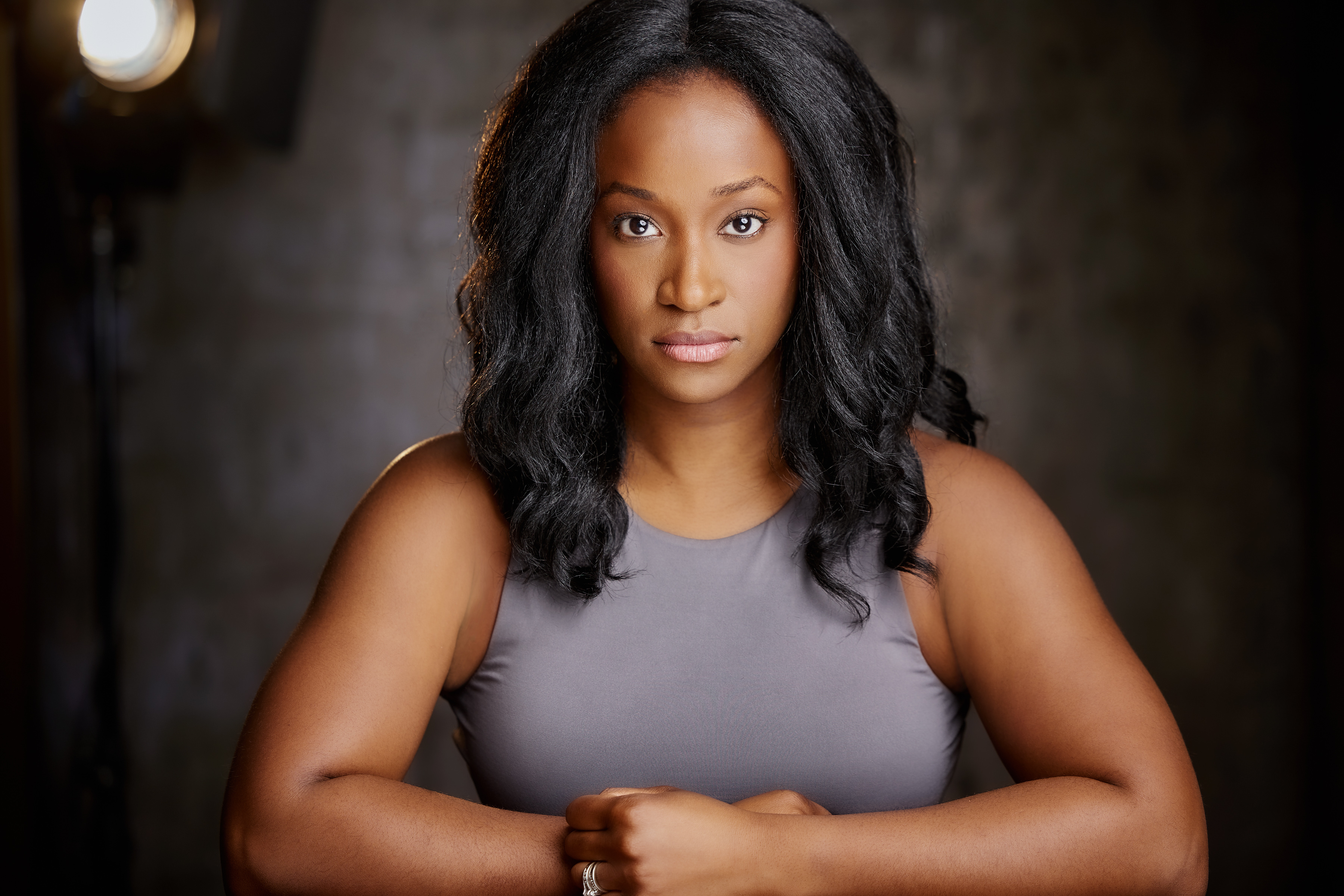 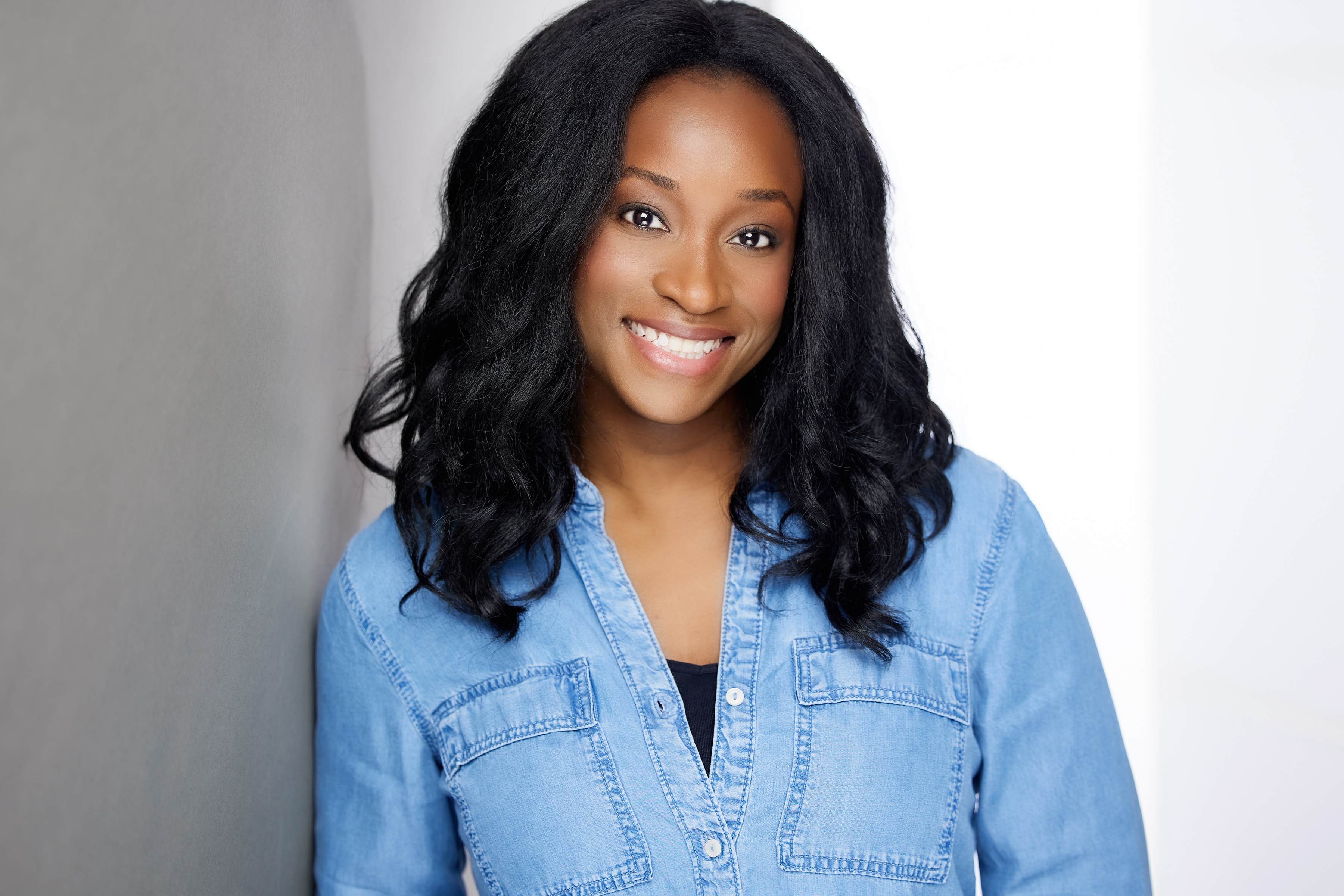 Let's see what my headshots will catch me in terms of casting rooms and roles.

If you have questions about this process, please drop them in the comments on the YouTube video here.  I'll be sure to respond to them. All the best!

Stay connected with news and updates! 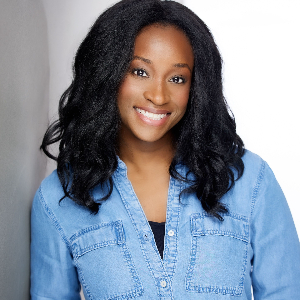 I am an Award-Winning Entrepreneur, Actor, Producer, Writer, and Content Creator, inspiring many through Film, TV, and Digital Media. My projects explore a range of cultural, psychological, and spiritual perspectives, including mental health (illness and wellness), ancient to modern wisdom, religions, paranormal activity, and more. 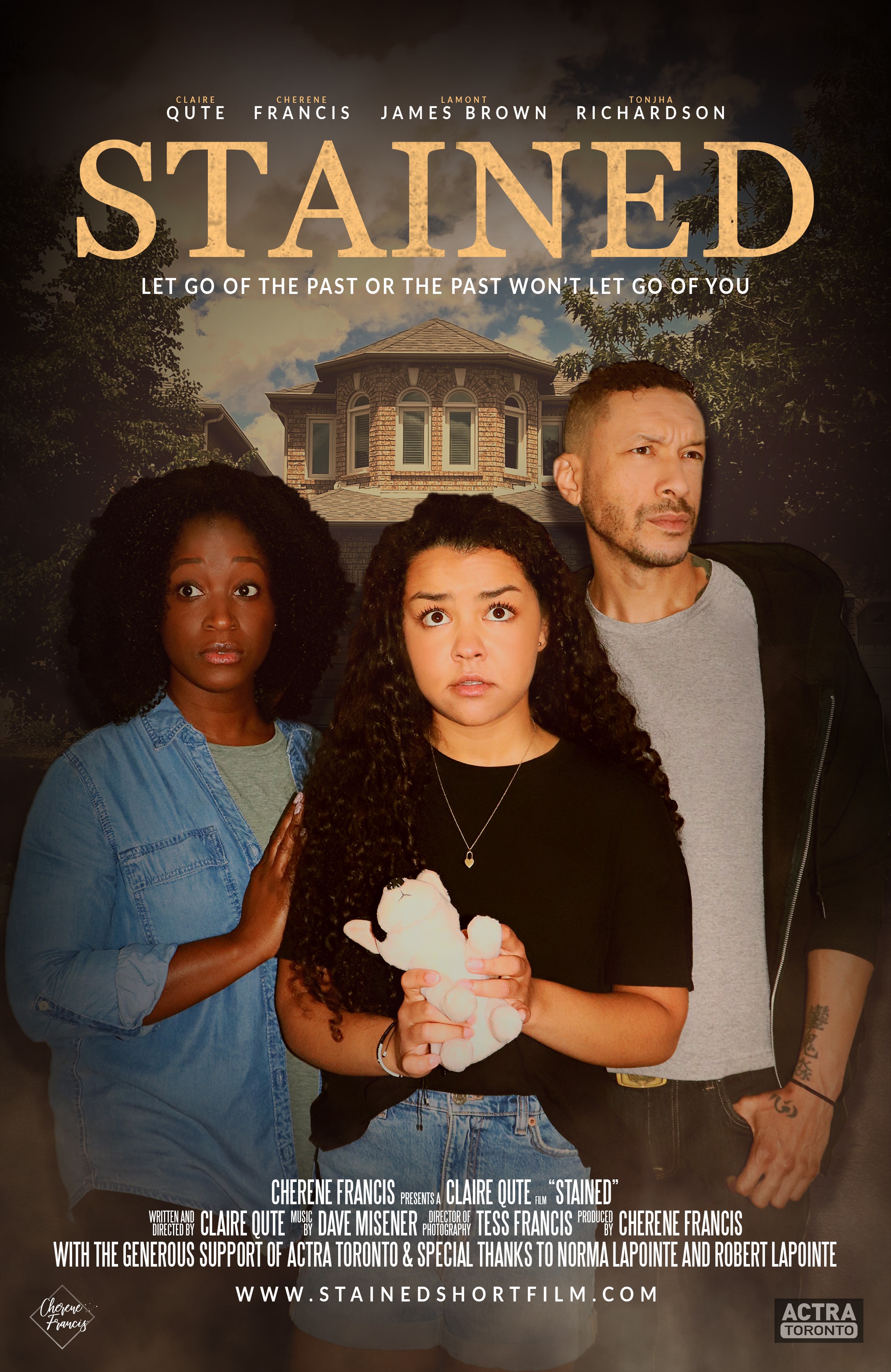 Get insights, updates, and event notifications straight to your inbox.